Home » Big Government » Congress is Hopeless but Republicans are Worthless

So you thought gridlock was finally a thing of the past with a GOP majority sending lots of bills to a Republican Oval Office? Nope. Gridlock never ended. It’s going to get worse. Progress on Capitol Hill is stalling. Congress is hopeless and lawmakers know it. They will either distance themselves from the investigation they started or take credit for going after the president. Forward progress? Forget about it.

Congress is hopeless and the GOP won’t seize anything

Speaker Paul Ryan assured us we will “Seize This Moment”1 when he talked about tax reform.

Rest assured we aren’t going to seize anything, especially not a big legislative package spearheaded by Trump. The Russia scandal is going to overwhelm everything.

There are lots of ways to wield the club of hopelessness over the people who look to Congress to fix what needs fixing, like health care and the tax code. One way is to threaten to impeach the president. That’s what lawmakers are doing now.

Another way is to threaten us with the budget. 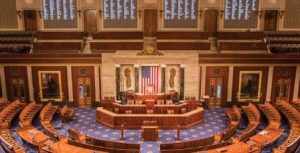 Making spending a moral imperative creates hopelessness. Despite what Congresswomen Barbara Lee (D-CA) and Carol Shea-Porter (D-NH) claimed when they saw Trump’s spending plan, the federal budget is not about morality.2,3 Budgets are not meant to create hope. They are made to prevent creating the mountains of debt Washington has placed on our shoulders.

Budgets are also meant to create gridlock. Over the years our hopeless Congress decided that the purpose of the budget is to save member’s jobs. That’s part of the appeal of having Republicans in charge. They also want to save their skins, but don’t have a reputation for solicitude. That means we don’t create more dependence and hopelessness.

Democrats charge that Trump is offering a “Budget of Broken Promises.”4 They hope we won’t notice their role in stalling progress by demanding that government deliver free everything.

This year we journeyed from health care to a budget proposal to a tax plan and then we appointed a special prosecutor.

Now Congress is hopeless again. Everything will stop. Lawmakers are off the hook until a scandal that will never be resolved is behind them. That’s the way they like it.

Hopeless Congress has no hope for us at all

President Obama was an ideologue. He even believed there was hope in the electoral process that Democrats allege helped the Russians elect Trump:

But, contrary to what we hear sometimes from both the left as well as the right, the system isn’t as rigged as you think, and it certainly is not as hopeless as you think. Politicians care about being elected, and they especially care about being reelected. And if you vote and you elect a majority that represents your views, you will get what you want.5

That process is over for now. We’re stuck with who we voted for. Congress is giving the appearance of acrimony to satisfy the public while working together behind the scenes. If you want an example of how this works and why Congress is hopeless, consider Paul Ryan teaming up with Nancy Pelosi on a “Task Force for Intergovernmental Affairs,”

a bipartisan group of lawmakers focused on balancing the interests between federal, state, tribal, and local governments.6

You always knew this was about the interests of government, didn’t you?

Trump investigation: this kind of bipartisanship is easy to predict

Instead of joining Democrats investigating our president with impeachment in mind, Republicans should return the favor and go after the Clintons. Return to that meeting on the plane between Bill Clinton and Loretta Lynch. Resurrect Benghazi. Investigate influence and the Clinton Foundation. Ask more questions about the law and Hillary’s server. Pull out every dirty trick in the book.

Instead, Republicans are gradually joining their partners across the aisle to create the do nothing, “Congress is hopeless” persona both sides depend on.

After Robert Mueller was tapped to go after the White House, Speaker Ryan made this remark:

… I welcome his role at the Department of Justice. The important ongoing bipartisan investigation in the House will also continue.7

Republican lawmakers’ phony, make-nice behavior towards Trump after the election won’t erase what happened last year. They hide behind the cloak of bipartisanship, as if this makes their behavior more palatable. It doesn’t.

Republicans need to give us a reason not to vote for Democrats, especially after they tried to undermine our choice even before last year’s GOP convention. They aren’t doing that. If Democrats are going to rule Washington, call the plays, and bully our president out of the White House we might as well vote for them because Republicans are powerless to resist.

Congress is hopeless, but Republicans continue to prove they are all but worthless.

I didn’t think it was possible, but the lie of conservative health care reform just raised the bar for Republican worthlessness. The only thing the GOP can do that will top passing a bad replacement for bad legislation is to repeal health care as America knows it, for better or for worse, without anything to put in its place.

That’s what McConnell and company are working on now.

Senators Bob Corker and Jeff Flake are getting plenty of face time with the press this week. Nothing attracts attention like criticizing the White House and ignoring the massive failure of politics that characterizes the GOP House and Senate.

One fact stands out: the professionals Senator Corker trusts to get things done are best at making sure nothing changes.

Foreign policy is not the only area where our political professionals failed. Set the years-in-the-making North Korean conflict aside. Health care is failing. Republican professionals did nothing. Instead, they left it to Trump to try to accomplish something with an executive order. Border security and immigration policy are absolute disasters. Republican professionals talk. They have done nothing. They left it to Trump to get the job done. Washington’s spending problem? Don’t bother to ask.

Now it’s tax reform. We’re going to hear a lot of talk. Nothing is going to happen because fixing the tax code is in the hands of Washington’s professional, worthless Republicans who know that the safest way to approach any problem is to pass the buck, talk too much, and do absolutely nothing.

The media fallout from Tuesday’s elections mattered a lot less than the Republican Party’s ongoing crusade to end its House and Senate majorities by angering liberals and conservatives alike.

We got a good, hard look at the Senate tax plan yesterday complete with a retreat on cutting corporate tax rates until after the 2018 midterms. Smart legislators back their president. Scared, desperate ones try to placate their opposition.

Meanwhile, House Republicans are trying their lamest to find a way out of their DACA dilemma. It’s a predicament that needs fixing, but should the party be thanking beneficiaries of short-term amnesty? Indiana Republican Susan Brooks seems to think so:

Thank you to the many DACA recipients from the Fifth District of Indiana who have shared their stories with me. These young people are contributing in significant ways to our communities.8

Apparently unable to come up with their own dialogue to battle illegal immigration, the GOP continues to steal from Democrats. Congressman Erik Paulsen (R-MN) tried his hand at liberal speak after a November 9 press conference:

This morning shows once again there is a growing consensus for a solution to help young people who came to our country through no fault of their own and for all practical purposes are Americans.9

Americans? If I was a Democrat I’d be laughing my way all the way to next November’s voting booth, where Republicans stand a good chance of redefining just how bad “worthless” can get.

UPDATE November 12, 2017: after letting down voters, Republicans turn on Moore

Do prominent Republicans who wasted no time hopping on the dump Roy Moore bandwagon know something that we don’t?

What Moore did or didn’t do is speculation. We do know that accusations of sexual misconduct are so politically and socially charged right now that even the hint of impropriety is enough to disgrace a public figure.

Moore’s guilt or innocence aside, Republicans calling for him to step down are teaching the left a valuable lesson. There won’t be a single conservative candidate during next year’s midterm elections who won’t be accused of the same type of behavior, or worse. As the years pass accusations become difficult if not impossible to prove and that makes this strategy all but foolproof. Rest assured that the response from party colleagues fearful of losing their grip on Congress will be the same: guilty if accused.

My website warned me that I needed to fix a link to Speaker Ryan’s congressional website. Why? Ryan is gone.

Now Pelosi is in. Democrats rule the House. Trump’s presidency hangs in the balance.

We watched the GOP stumble on health care. Republican lawmakers passed a tax plan they couldn’t sell that was ultimately used against them in the 2018 midterms and is on the list of liberal fixes for 2019. The party’s historic fall from grace means punishment for conservative, fiscally responsible taxpayers who won’t warm up the current House’s socialist-leaning tendencies.

Do we have a voice? Not anymore.

Thanks, GOP. You blew it for us again.

Just when we thought it couldn’t get any worse there was a ray of hope. Trump held out for a secure border. Democrats had their backs against a wall. Pelosi struck back and tried to embarrass the White House by denying the State of the Union after she was left on the tarmac without a plane.

And then it all fell apart. The media, Democrats, and restive government workers spewed a continual flow of venom. The Republican Senate couldn’t get the votes to pass a spending bill with or without the Trump barrier.

No State of the Union on Tuesday. No border wall funding. No Republican victory.

As a long-time Republican voter I’m ashamed and embarrassed.

2. “Congresswoman Barbara Lee: This Budget Is a Recipe for Greater Instability, Hunger and Hopelessness.” Barbara Lee. March 16, 2017. https://lee.house.gov/news/press-releases/congresswoman-barbara-lee-this-budget-is-a-recipe-for-greater-instability-hunger-and-hopelessness, retrieved May 15, 2017.

5. “Remarks by the President at Commencement Address at Rutgers, the State University of New Jersey.” The White House. President Barack Obama. May 15, 2016. https://obamawhitehouse.archives.gov/the-press-office/2016/05/15/remarks-president-commencement-address-rutgers-state-university-new, retrieved May 15, 2017.

7. “Statement on the Appointment of Special Counsel.” Speaker Paul Ryan May 17, 2017. http://www.speaker.gov/press-release/statement-appointment-robert-mueller, retrieved May 19, 2017.

Photo: “Guide to the Chamber.” Office of the Clerk. U.S. House of Representatives. http://clerk.house.gov/about/chamber_guide.aspx, retrieved May 19, 2017.