Democrats won’t see the humor in a big U.S. auto manufacturer hanging up plans for production in Mexico. They won’t admit that they have already handed us the solution to manufacturers leaving the U.S. for cheap labor elsewhere. Cheap labor is already here. We can thank ridiculous policies that only make sense to those who are too wrapped up in liberal self-indulgence to see the big picture and question its validity.

Cheap labor, even if it’s illegal, is still cheap

Not everyone knows that we guarantee illegal immigrants minimum wage. Surprised? Illegals can’t legally work here, but if they do they are still protected by federal wage laws. That means at least $7.25/hr.

This makes no sense, but the pay is pretty good by Mexico’s standards.

Can we put our illegal labor supply to better use? 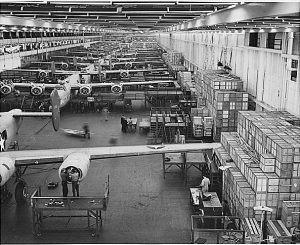 Why leave? We have lots of cheap labor.

We have an opportunity to throw out the whole manufacturing labor paradigm and replace it with something cheaper that goes perfectly with the absurd Democratic immigration policies hatched under Obama.

Trump scored points after Ford recently changed plans for Mexico, but there was never a need for an auto manufacturer to seek out cheap labor in another country. We have more than enough here at home. The problem is that we aren’t using it to our advantage.

We hear that highly-trained, productive manufacturing workers can only be found in the U.S., but corporate big brains obviously believe they can get what they need in other countries for a lower sticker price. They must have a need for cheap labor. We can provide that from our pool of illegals, over half of which come from the same country Ford was destined for: Mexico.

Besides, Obama’s executive immigration orders were passed in part because of the potential of our illegal workforce. The White House confirmed:

The President’s actions will grow the economy by increasing the productivity of all American workers. These actions will increase the productivity of American workers, in part by allowing undocumented workers to come out of the shadows and find jobs that better match their skills and potential. This shift of workers across occupations will also allow more native workers to specialize in the tasks best suited to their abilities.1

The Democratic Party needs to decide who has more value, union bosses or the cheap labor manufacturers will leave the U.S. to get their hands on.

All Trump has to do is pass a few Obama-style orders and illegals can work for U.S. manufacturers. He can ask Eric Holder for help while our ex-attorney general opens shop in California. Holder has experience sorting through the legalities of this sort of thing. Who better to navigate a new manufacturing work permit system?

We should pay illegals minimum wage in exchange for being rescued from Obama no green card limbo. Auto manufacturers will get their cheap labor. The only ones who will lose are American manufacturing workers who lack skills, but they are going to lose sooner or later anyway. Perhaps manufacturers can train them up for the talents they need with the money they save.

It’s not as if Democrats who say they support our workforce worried about the impact of unchecked illegal immigration on Americans. Instead, they were focused on taking credit for not deporting illegals.

Would we put Americans out of work? Would they lose well-paying jobs? The big bucks go to employees with advanced manufacturing skills. That hasn’t stopped demands to pay unskilled labor $30,000 annual wages. Fortunately, illegals are in a whole different class. They shouldn’t be working at all. $7.25 an hour and a pass on deportation would be a gift.

Is this idea discriminatory or even cruel? This is the same kind of immigration duplicity Obama brought us with DACA, a hollow promise without a plan and no clear path to legal status in the U.S.

Liberals will waste no time wailing away the moment Trump starts to enforce immigration laws. Humor aside, this plan would be a win-win for everyone and a big favor to illegals. It’s not as if we asked them to look for work here, is it?