Do you still have a right to celebrate July 4th? The nation is up in arms because many of us are going along for the left’s angry ride instead of questioning what we are told we have to believe to be good Americans. When we do that we give up our freedom.

Democratic propaganda vendors are hard at work. Ask yourself: can a free society accept that it’s fair for celebrities to make a joke of threatening the president’s life or for the media to condemn his every word and deed, but unforgivable for him to fire back with the same venom?

That’s where we leave off as this week draws to a close and we stare another July 4th holiday weekend in the face. 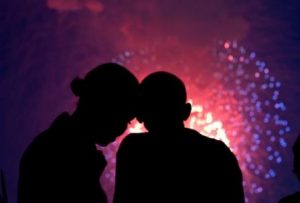 What’s that expression about not being able to stand the heat?

Deputy Press Secretary Sarah Sanders pointed out the obvious yesterday after President Trump’s latest retort to the mounting hostility against everything he says and does:

So to then turn and pretend like this approach is — I guess it’s kind of like we’re living in the twilight zone. They do this day after day after day, and then the President responds and defends himself and everybody is appalled and blown away.1

There is no decency, dignity, or respect in the attacks coming from the entertainment industry (yes, that includes “news” sites), even though simple civility tells us that incitement, hatred, and thinly veiled death threats should be off limits. Shouldn’t fairness and equality allow the same lowbrow response?

A few fraidy cat Republicans are worried about Trump’s social media fusillades. They should be asking why we don’t extend to him the same freedoms we take for granted when they are abused by others. If they think there is dignity in politics, they should find something else to do with their time. Dignity is not what politics is about.

Fourth of July freedom for some, tyranny for others

July 4th is about freedom from tyranny, but the national dialogue has deteriorated to the point that the left has absolute control over what’s right and wrong in America. If more Republicans had the intestinal fortitude to fight back as loudly as the president, maybe we wouldn’t have to tolerate so much abuse.

Before you get the grill ready and haul those illegal fireworks out of the basement, pause to ask yourself a few questions about freedom.

A few questions about freedom and liberty

With Obama out of the picture we have an opportunity to stop giving America away to placate the angry left at home and an international community that takes much but gives little. With that in mind, how would you answer these questions?

Do Americans have the freedom to decide who comes to our country and who doesn’t?

Should the freedom and safety of our citizens always come first?

Is there ever a good reason to give up your freedom to the government?

Does silencing dissent protect our values?

Should the U.S. surrender to the world community on issues like climate change and governing the Internet?

First Amendment limits are off limits

Free speech is a big deal. It’s one of the things we pride ourselves on. There is a lot of hypocrisy in political correctness that cuts deep into this fundamental American right.

Is it okay to threaten a president because you disagree with what he does and free speech rights permit it?

Does respecting another American depend on their politics?

Should public figures have a different measuring stick for free speech than the rest of the nation?

Are jokes about sexual preference and race off limits to anyone not in the entertainment industry?

Is political correctness and fake news the same thing?

If you want to use the term “fake news” then you have to admit that all news is fake because its spun and packaged as entertainment. There is no such thing as unbiased news coverage. That raises a few questions:

Do “political correctness” and “shut your mouth” belong in the same sentence?

Is the political party you belong to always right?

Do you believe everything you are told by public figures you agree with?

Is your news source the only one that is fair, truthful, and unbiased?

Does the tyranny of the rich only apply to wealthy conservatives and not the Hollywood cognoscenti?

One more, just for fun:

If you are spending your money on another bad Hollywood movie this weekend, WHY?

Put your wallet away. Instead, if your answers to these questions drew an unflattering portrait of how you feel about freedom you might want to put the grill away, drag out your high school history books, and refresh your memory about what celebrating July 4th is all about.