2020 was a horrible year for many Americans. The pain and suffering isn’t over yet, not by a long shot. We lost over 400,000 people to COVID-19. More will die in the months to come while small businesses continue to fail and the desperately needed vaccine is dealt out by politics and bureaucracy.

This doesn’t seem like an appropriate time to hold a flashy celebration. Too many have suffered too much. Too many have died. Even optimistic Joe Biden warned us that the worst, darkest days are yet to come.

So what are we celebrating tonight? Liberal elitism.

Sadness over the coming dark days won’t permeate plans for Democratic Party oligarchs and entertainment elites to kick up their heels and celebrate the progressive takeover of America. This is a very big deal for them, a joyous day. They are rid of Trump. Now they can proceed to inflict the liberal values they warned us about. No one can stop them. We can’t even count on Republican turncoat and new Trump detractor Mitch McConnell to stand in the way.

The Biden administration calls the planned prime time Inauguration Day extravaganza “Celebrating America.” Tom Hanks will MC. Celebrity elites will be paraded before the American people in an embarassing display from an industry that tirelessly contributed to the Democratic Party’s hatred for our last president.

This could have been so much better. President Biden had an opportunity to truly celebrate America in the midst of so much suffering. Instead, he chose privilege and elitism.

Biden could make an address to kick start the national unity he talks about, feature a few of the ordinary Americans presidents like to feature at this sort of thing and then after a few fireworks we could call it a night. Or he could do nothing at all. A quick speech and perhaps a prayer and then back to work. This would be wholly appropriate. Fireworks aren’t good for celebrating sickness and death, anyway. 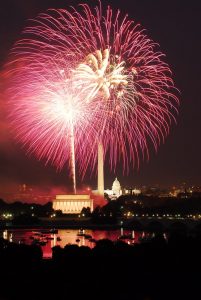 Elitism and death are not things America should celebrate.*

Instead, while hospital workers across the nation watch people die Americans will be treated to a roster of A-list entertainment industry elites who are wealthy, privileged, and like Biden and Harris completely removed from what most Americans experience in lives that for many are now a daily horror show and for some will end before 2021 is over.

Nero would be proud

Slavering over highly-paid celebrities is not a way to celebrate America. Neither is showcasing entertainment elites while blaming Trump for hundreds of thousands of COVID deaths and the public health cataclysm yet to come that will also be his fault. This is hypocritical and wrong. Nero would have been impressed.

I don’t know who Demi Lovato is or even whether this performer is male or female. The name is on tonight’s entertainment list. When I looked up this person online to find out it doesn’t appear that Donald Trump was a favorite. That’s not a surprise.