Home » Immigration » Being Illegal is Easier, Safer, and Better Than Ever

Mexico and Central America are invading the U.S. thanks to the generous misuse of your tax dollars. Federal help has made being illegal in America easier and better than ever. If you come here and want to stay, chances are you can do it. If you want the government to lend a helping hand, chances are it will.

The border surge of child migrants from Central America shifted our attention from Mexico and towards countries like Nicaragua and Honduras. Officials in charge of immigration policies noticed. Instead of responding by stopping the swarm at the border, they continued to go out of their way to show the world how accepting America is.

If you respect this country you already know how generous we are. We don’t have to prove anything to anyone except our own liberal fringe. 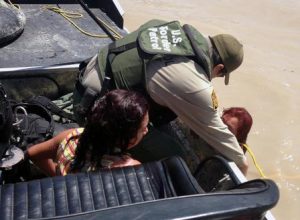 Being illegal gets you sanctuary, amnesty, maybe both

While we were distracted by the ridiculous back and forth of this year’s presidential campaigns the U.S. Customs and Immigration Service snuck in a little help for illegal aliens.

The agency has a history of making being illegal easier. The USCIS CAM program helps bring minors from Central America into the U.S. safely:

The Central American Minors (CAM) Refugee/Parole Program provides certain qualified children in El Salvador, Guatemala and Honduras a safe, legal, and orderly alternative to the dangerous journey that some children are currently undertaking to the United States.1

That’s how our Federal Government solves problems. It creates new ones that make the old headaches seem not so bad. Then it tries to convince us that we are better off.

One of CAM’s benefits is that if you enjoy being illegal and benefit from Obama’s deferred action amnesty you qualify to bring your kids here. That’s a pretty darn good deal. Deferred action was supposed to be for younger people who are here because of their parents, not kids who were left behind. No matter. There are even better things to be had from U.S. Customs.

Citizens from El Salvador, Nicaragua, and Honduras get to stay even longer

On July 8, 2016 USCIS announced that Temporary Protected Status (TPS) was being extended for citizens of El Salvador. The same good news was delivered to citizens of Nicaragua and Honduras on May 16, 2016.

We can’t place all the blame for this on Obama. Grants of TPS are nothing new. What is notable about these extensions is how they help feed the avalanche of problems from illegal aliens encouraged by Obama’s immigration propaganda.

El Salvador, Nicaragua, and Honduras send lots of illegals our way, including the children who stormed the border this summer and last. It’s not as if we make it difficult. We still refuse to protect the U.S. boundary with Mexico. This gives Trump’s wall a lot of appeal for taxpayers who think our money should be spent on citizens.

How to stop being illegal? Don’t spend more money south of the border.

Not everyone agrees on what the problem is. One of Obama’s ideas promoted by Senator Tom Carper is to spend another billion in U.S. taxpayer dollars to make life better in Central America:

Of the nearly $250 billion we have spent to strengthen our borders and enforce our immigration laws, less than 1 percent of that amount has been used to help proactively address the root causes that compel so many Central Americans to risk life and limb to come here. It is time to address these issues on both fronts, not just at our border.3

We will have to dump a lot more tax money than that to make living in the U.S. less appealing. If you don’t appreciate everything living here has to offer you may not realize just how good life in the U.S. is.

Instead, let’s spend our tax haul on a pile of bricks and mortar.

Temporary Protected Status: they got here, so let ‘em stay?

Rather than take the steps necessary to end the crisis at the border, the Obama Administration perpetuates it by abusing a legal tool meant to be used sparingly to bring people to the United States and instead applying it to the masses in Central America.4

TPS isn’t amnesty per se any more than deferred action is permanent, but part of being illegal means you know how things work here. Once your foot is in the door you can either disappear or take advantage of federal protection that makes life in the U.S. easier and better. Federal programs and Democratic plans for comprehensive immigration reform favor those who have defied the law the longest.

The Obama administration calls being illegal living in the shadows. For once, the president isn’t giving himself enough credit.

Those of us with nothing to gain from being illegal or making life better for those who are call it breaking the law.

I hope Trump has placed his order for bricks.