Home » Government Ethics » A Queen is Better Than a Bad President

We don’t need another bad president. Bad presidents cause problems. They are hard to control. Often they want to stick around after one term. We have to waste time and money fixing their mistakes and dealing with the irresponsible things their advisors do. What America really needs is a queen and a royal family, not a president. A queen is someone we can adore while Congress takes the reins and drags the country off a cliff.

Why we get stuck with bad presidents

Over the years we have tolerated all sorts of bad behavior from our presidents. Americans have found out about high level moral lapses, legal transgressions, power grabs, lying, and cover ups. Bill Clinton was a low point conservatives like to remember, but as bad presidents go he had competition. He wasn’t forced to resign in disgrace.

Many would argue our current president was a bad pick. Others think he is the best we’ve had in years and that George W. Bush was the disaster. Opinions vary, but the fact is that too many of us will always think we were stuck with a bad choice.

Congressional gridlock is going to get worse. Pressure groups are gaining power. Our diversity is catching up to us. That means more bad presidents who, through no real fault of their own, will be unable to get anything done without violating the law or the separation of powers.

Being America’s president is a fool’s errand. The only people who would want this job on their conscience must have a screw loose.

That’s not a good thing for the country. 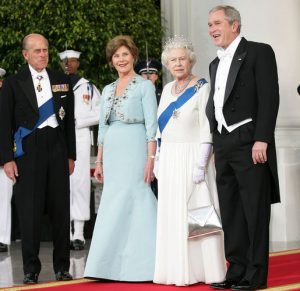 Part of our bad president problem is our own fault. We have expectations more suited to a god than a flesh and blood politician. We require absolute moral forthrightness from someone whose job could include vaporizing civilization. That’s asking a lot. Even our fantasy heroes on the silver screen aren’t expected to be perfect.

That’s where a queen can fit in, especially if we don’t give her anything to do except act royal. Not being perfect with no power is a mix most of us can tolerate. At least it won’t do any harm. We already pay plenty of senators and representatives for that. With a queen, every time lawmakers screw something up we can parade our royal family on television. If Congress does something truly horrendous we can have a royal scandal. The filthier and more cringe-worthy, the better. It won’t hurt anything, but it will take our attention off the things we know government can’t and won’t fix, like the influx over our Southwest border, Obamacare’s ruinous health insurance costs, and the shameful troubles at the VA.

Republicans create a bad president all their own

A person whose finger hovers over the nuclear button is not someone to be trifled with. Neither is the speaker of the House of Representatives.

Paul Ryan is making an unusual grab for the presidency. Unlike his failed vice presidential run with Trump backstabber Mitt Romney, the Speaker has cast himself as Oval Office kingmaker as he parries with the man his party appears stuck with, like it or not.

The America that you want is the America that we want: open, diverse, dynamic. It’s what I call a confident America, where the condition of your birth does not determine the outcome of your life.1

Ryan’s party has made a point of battling liberal plans for our open, diverse, and dynamic country. For conservatives that’s a good thing, but unless the speaker plans on adopting Sanders-style socialism the condition of our birth will always have a lot to do with how most of our lives turn out.

What does that mean for the nation?

It means any conservative running for our highest office will be a bad president. If we are going to make it impossible for anyone to take office, get anything done, and not be hated by millions of Americans who think they got a raw deal, then it is ethically wrong to ask anyone to be president.

Besides, the office of president doesn’t work anymore. Our political system can no longer accommodate a single person wielding that much power.

We need to face facts. It’s likely that we will never again have a head of state we like. We would be better off putting a queen and a royal family in place and spreading our collective anger across our senators and representatives. These are the people we truly elect without the aid of a shady convention system or shadowy Electoral College. With a queen to idolize and fawn over, the people will have a distraction while the rest of government does the dirty work of screwing up the country.

A queen is what America needs

During a 2011 visit to London, President Obama was reminded by Queen Elizabeth that:

In your inaugural address, you spoke to the American people of the values that lay at the heart of your nation’s success — honesty and hard work, courage and fair play, tolerance and curiosity, loyalty and patriotism, and of the sturdy alliances an enduring convictions with which your nation had met past challenges and would meet future ones, too.2

Every single one of these values has been questioned, beaten, and bullied by this administration, in part because the president took it upon himself to do things the people and their legislators never authorized, like rewriting the rules of how our kids use bathrooms in schools. Should that make Obama our national punching bag? No, it shouldn’t. It’s difficult to argue that the president doesn’t think he is doing the right thing and many agree with what he’s done.

In politics blame is a fickle thing. Yesterday’s hero can suddenly become today’s villain. Good ideas fail. Bad ideas bring unforeseen benefits. At the center is a figurehead we elect with limited powers and responsibilities but expectations from the people far beyond what any mortal should shoulder.

That’s what makes installing a queen with absolutely no power such a great idea. All she has to do is look regal. It works well in the UK, though the Queen of England does have some limited powers. Every so often the royal family throws the tabloids a bone, which will be a good thing for our media.

Meanwhile, our legislators can run the country. They can vote on Supreme Court justices without interference from the White House. They can pick the agency heads that used to make up the president’s Cabinet. They can propose budgets we can’t afford. They can declare war whenever they want and not have to worry that their power to wreak havoc is being usurped by a person they can’t control.

So how do we dump our president and find a suitable queen?

First, we’ll have to hold an election …