While every headline brings us a new twist to this year’s struggle for the presidency, 15 people are working in the background to decide the direction the country will take. You didn’t get to vote for any of them. They were chosen. Unlike the next president we elect, when these people leave you won’t get to have a say in their replacements. Who are they? The department heads serving on the president’s Cabinet.

Think about the movers, shakers, and agitators who have made things happen for Barack Obama. This week Labor Secretary Tom Perez is pushing forward a change to who is eligible for overtime that will dramatically affect businesses and as many as 5 million workers.1 Like other Obama orders carried out by his Cabinet secretaries, this policy change will not require a single congressional vote. 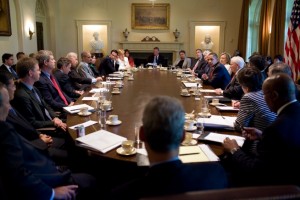 Cabinet meeting: how policy is made
Photo by Pete Souza

Senate approval doesn’t mean much, does it Mitch?

It doesn’t matter whether the next president we elect is a Democrat or a Republican. The cycle will repeat itself all over again. Cabinet members will be chosen. None of us will have a voice.

Having some fun with the partisan firestorm that erupted after Justice Scalia’s sudden demise, Mitch McConnell said NO to considering an Obama Supreme Court nominee, remarking that “the American people should have a say in the Court’s direction…”2

A Senate thumbs up or down vote on a new Supreme Court justice gives us about as much say as we have with Cabinet members who have a lot more to do with shaping national policy. Having an illusory voice through our lawmakers didn’t stop a list of partisan Cabinet picks and the bad ideas that came down on our heads as a result.

Next president we elect won’t do all this

A willing Cabinet can get a lot done, whether we like it or not.

Janet Napolitano and Jeh Johnson used Homeland Security to shape immigration policy. They got deferred action amnesty up and running, luring illegals to America while telling the people about the backbreaking effort and inestimable resources spent keeping the Southwest border secure.

Labor Department Secretaries Hilda Solis and Tom Perez were picked to oversee laws governing America’s workforce. They made sure our umbrella of protections included illegal workers and went all out to protect their rights, strengthening another incentive to come to America illegally.

One of the lingering issues of the Obama presidency is that people have gone back to work but their incomes have been stubbornly resistant to change. There is no executive order that will raise minimum incomes nationwide, but overtime for workers making up to $50,440 annually3 is on the table and moving to the next level. The Hill reported that the final overtime rule was destined for the White House this week.

Obamacare will be the legacy of these tumultuous eight years. One of the casualties was Health and Human Services Secretary Kathleen Sebelius, who ran into technology issues during government health care’s roll out that helped end her Cabinet career and oversight of the president’s biggest achievement. Before her departure Sebelius oversaw an enormous bureaucracy that encompassed Medicare, Medicaid, Head Start, the Affordable Care Act, and countless other programs. That’s one of the pitfalls of the public not being able to vote for Cabinet secretaries. They oversee empires that are often vast and spend tens of billions of our tax dollars while serving as the president’s personal partisan puppets.

The idea that the Common Core standards are nationally-imposed is a conspiracy theory in search of a conspiracy.4

Fortunately, his idea that teachers should be paid $150,000 per year never went anywhere. That’s not for want of trying.

Where to begin? The DOJ clamped down on profiling, defended illegal immigrants, and sued states that didn’t want to take care of them. The department attacked criminal justice and sentencing as Obama released offenders incarcerated under laws deemed unfair. That wasn’t enough, so Holder and Lynch fanned the flames of Ferguson and Baltimore by reassuring agitators and activists that how this country polices criminals and crime was killing African Americans.

Now that we are wrapping up primary season and a Trump-Clinton standoff seems inevitable, don’t forget Secretary of State Hillary “Benghazi” Clinton. That pick will keep on giving in the unfortunate event she becomes the next president. Republicans will occupy themselves for four to eight years trying to impeach her for events that took place while she oversaw how America dealt with the world. From her video appearance with our president on Pakistani TV to appease rioting Muslims to the myriad explanations for what happened in Benghazi, Clinton rose to the top of Obama’s Cabinet cadre. She joined Eric Holder in proving that a Cabinet secretary has powers that are arguably above the law. If Clinton takes up residence in the Oval Office, those powers and the trouble they caused will be all you hear about for a very long time.

Next president less important than the Cabinet

Barack Obama isn’t the only president who has made some self-interested Cabinet choices. That’s what presidential appointments are all about. Many of his first term picks have left, but their successors have dug even deeper holes for the nation (think Ferguson, Baltimore, and Loretta Lynch).

Senator McConnell is wrong. The people have no say in choosing presidential nominees. This is about playing games, doing favors, and political strategy, not representative government.

The heaviest of these 15 players had as pivotal a role in shaping policy as anyone in Washington including the president and certainly more than Congress, which has accomplished little or nothing lately. The best our chief executive can do is come up with ideas. Someone has to carry them out and in lieu of congressional consent Cabinet members come up with ways to do the dirty work.

Whether the next president we elect is Trump or Clinton (yes, that is what it is going to come down to), look to the people the winner chooses as their Cabinet advisers. While Congress ties itself up in knots to avoid having to do anything worthwhile, these are the people who will determine what the country becomes.